Let me champ ji kar (add a voice) in our last night drama… just my 2cents worth:

1a. Is more than entertainment, is actually an wake up call… i agreed with some fb postings, take years to build a nation, and it’s possible to destroy it overnight.. no need war, just internal civil unrest will bring any great nation to her knees..

1b. I personally pray that this is an isolated case.. i feel that we have for a moment stolen lime light from our neighbor country who herself is now in crisis.. and that’s to all our silly fb comments; if internal nation’s civil problems are so easy to solve by your ideas of solution.. you should try running for elected MP… ..

1c. We, 1 night drama, so much comments and thoughts and feedback… imagine our neighboring country who are now in crisis, they have it worst. Logic or non logical.. when volume of people gathers, livelihood are affected overnight when it gets out of control.. It is a blessing that our present government could still handled it effectively.

2a. Those uniform personnel on site are someone’s father, son, mother and daughter also you know.. they also have family back home waiting them to return alive..

80% Yes, we thank God we have an overall effective Home Team to keep our space safe.

20% No, in a sense when you realize that they are someone’s father, son, mother and daughter on duties. But i guess is part of career risk when you choose this path..

This 20% comes about when I was serving my NS MANY years ago, there was REAL (details reserved) national threat over a change of location on a certain landmark.. I mean, it’s a real deal.. our camp involved standby with all live rounds, tanks and what have you prepared as our officer giving an solom and official announcement with all our battle gear on for that night. Once our camp “Red” phone rings, we’ll move out that night… Although, is not a full war-war but to jarga our position, the thought of having to carry live rounds loaded in M-16 rifle and in tanks in a public place is enough to make you think if you could stay alive that night..

So, for those who say, why police not do this or that on site… until you have your life on the line, your comments and suggestions are frictional… I can dare tell you, all the 3x fully loaded Ang chia police responded, would have the similar thoughts racing through their mind while carrying out their duties for REAL this time.. training and real encounter is TOTALLY different, uniform personnel applies all the knowledge that has been taught to first stay alive and second to capture the objective while the situation is in chaos..

So, to those keyboard warriors and fantasy commentators.. mummy calling you for makan liao… ^ 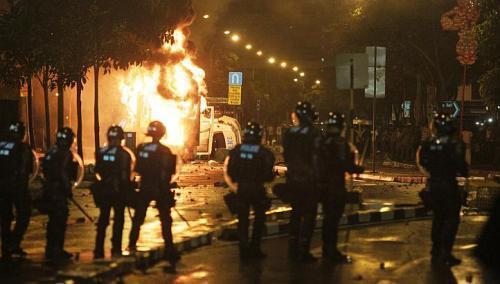 14 Aug 2014 Summary of whom & what my belief thru the expression of the Apostles’ Creed: I believe in God the Father, Almighty, Maker of heaven and earth: And in Jesus Christ, his only begotten Son, our Lord: Who was conceived by the... Continue →